It’s unique contextual GIS platform allows you to combine multiple different data sets into a complete 3D document that you can share with fellow Arena4D users.

Arena4D Data Studio also runs in a free “View only” mode that allows you to open and view other peoples projects, even if you don’t have a licence.

Arena 4D is capable of visualising point clouds, imagery, panoramas, shape files, GPS tracks and much more all in a single contextual view. No need to swap packages to see all your data together.

Arena4D allows you to markup, annotate, measure and even edit your point clouds too. They can then be exported in many common formats.

Also included is a powerful animation package that generates HD quality movies quickly at the touch of a button.

Arena4D Point Server is an HTTP server capable of streaming Veesus Point Cloud (VPC) files across your network and the internet.

Compatible with both Arena4D Data Studio, Arena4D for Rhino and Arena4D Web, you can now share your data from a central repository and seamlessly stream the point cloud data to your chosen client.

Arena4D Web allows you to view data in your server in any modern web browser, even those on mobile devices.

Arena4D for Rhino is a plug-in for the popular Computer Aided Design package Rhino by McNeel.

Arena4D for Rhino leverages the Arena4D point cloud engine from our Data Studio tool and makes it available within the CAD environment.

All the tools associated with the normal Data Studio engine are available such as smoothing, lighting and magnification. Also included are slicing, clipping and export functions.

A built in VPC generator allows you to convert your current point cloud files into Arena4D formatted files without needing to use the full Arena4D Data Studio package.

All Veesus Point Cloud products come with the XStream Engine built in. This engine allows point cloud data with Billions of points of data to be easily managed and viewed on standard laptops and desktop computers. It’s multi-threaded, efficient design and implementation reduces the overhead on your computer typically associated with point cloud data. 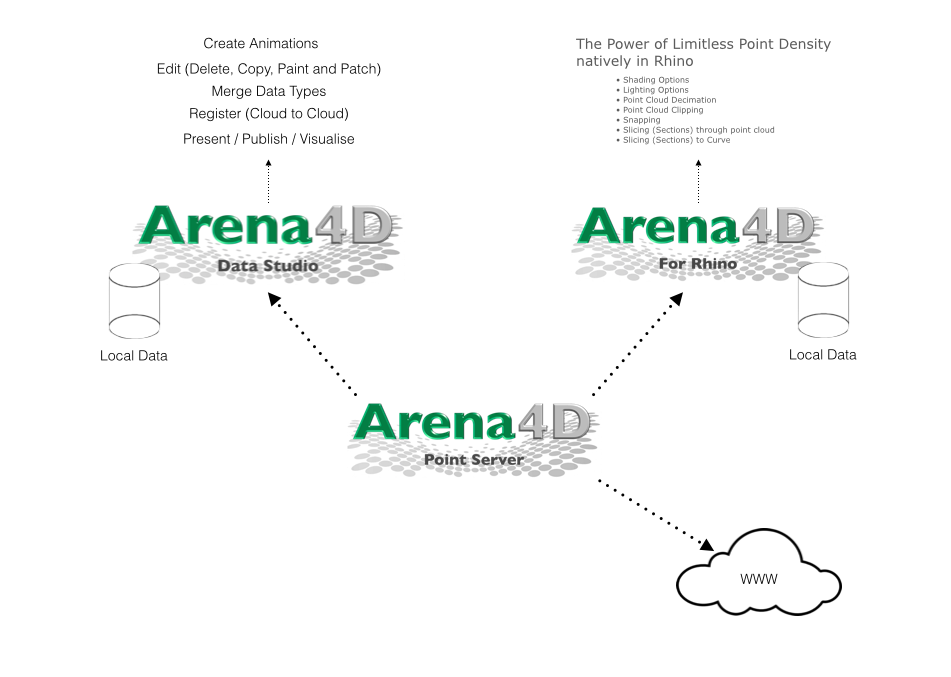